It's Something Wiki
Register
Don't have an account?
Sign In
Advertisement
in: It's Something, Cryptozoology, Cryptids,
and 7 more

The Abath is a creature similar to a European Unicorn that was first found in documents dating around the 16th century.

European travelers brought back reports of these creatures from the Malay Peninsula.

Described as female, with a single longer horn growing from its head, it is widely believed that the Abath was nothing more then a half glimpsed Javan or Sumatran Rhino.

(No word on how they could tell it was a female)

Like the mythical Unicorn, the Abaths horn, when powdered,supposedly acted as a aphrodisiac and all-curing antidote. 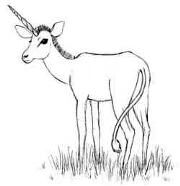