It's Something Wiki
Register
Don't have an account?
Sign In
Advertisement
in: It's Something, Cryptozoology, Cryptids,
and 4 more

The Adjule, also known as Kelb-el-khela or Bush Dog for the male and tarhsît for the female. The Adjule is a cryptid canine. Sightings are in North Africa near the Sahara Desert. First reports came from primarily by the nomadic Tuaregs, and Théodore Monod in 1928. The adjule is claimed to be a phantom which takes the form of a dog or wolf. This cryptid has been proven false and its sightings attributed to wild canines mistaken for the adjule. One example is the African Wild Dog which is now extinct in certain areas of the Sahara.

It is said to be about two and a half feet tall, and having rough thick crimson colored skin which has a bluish tint. It also has webbed feet. Descriptions have the wolf-like creature weighing in at about thirty to forty five pounds. The Adjule are not lone creatures. They hunt in packs of three to thirteen. Some claim that these creatures have supernatural powers. The locals of the Sahara say it uses pheromones to cause great contention or discord among the area's residents allowing them to hunt their prey. There are no records that the Adjule attack humans.

The most recent reports come near recent reports place them in Koro Toro, CHAD. Another was in 1992, in Western Mauritania. There are no known photos of these creatures. Some blame this on the elusiveness of the creature. 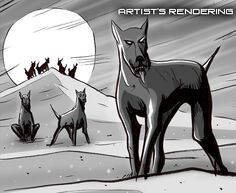 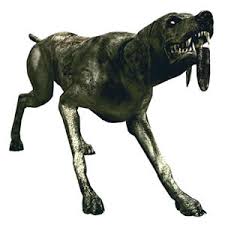