It's Something Wiki
Register
Don't have an account?
Sign In
Advertisement
in: It's Something, Cryptozoology, Cryptids,
and 11 more

The Adlet are blood-sucking creatures based in Inuit mythology. They are also known as Erqigdlit to the peoples of Greenland and Baffin Island. Werewolf-like in appearance, it is said they are the result of a union between an Inuit woman and a giant red dog. I’d be willing to guess that’s one story about Clifford that PBS isn’t going to ever publish.

The woman gave birth to ten fur-covered puppy-kids. Terrified, she set five of them adrift in the sea. According to the myth, these five managed to cross the Arctic and Atlantic and spawned the European races.

The other five became known as the Adlet. They remained with their mother, apparently because she decided she could handle just five little abominations. Instead, they grew into five big abominations that developed a taste for human flesh, fighting, and presumably, causing trouble for their mom by trying to be too damn helpful. The Adlet and their offspring (also called Adlet) now wander the tundra in packs, seeking out Inuit villages to feed on.

The real tragedy here is this whole thing probably could have been averted if the poor little guys had a solid father figure in their lives. Clifford, stay together, for the puppy-kids. 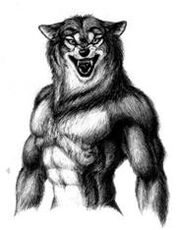