The Afanc, Avanc or Addanc is a creature from Welsh folklore that lives in lakes. It's description differs highly ranging from dwarf, beaver, crocodile, and is sometimes said to be a demon but it is most favourably depicted as a large frog with claws on all limbs.

The Afanc is sometimes said to have magical powers and even the ability to speak Welsh. In one tale it uses these powers to turn its thrashing of the lake into the mythical deluge that appears in many mythologies.

The most common story that surrounds it is a town is plagued with its carnivourous activities so much that they resolve if they cannot kill it they shall take it to another lake away from them. They employ the Afanc's one weakness, a beautiful woman who lures the Afanc to sleep upon her lap. The villagers then bind the Afanc with magical chains and use two oxen to drag the creature across to the next lake. The brave woman's name in this story is not remembered which is a pity considering that in the struggle with the Afanc to chain it. In the story it tore off one of her breasts.

Some later legends say that once the creature was dragged out of the lake he became powerless and was killed by Peredus, or King Arthur depending on which tale you read. Close to Llyn Barfog in Snowdonia, is a hoof-print petresomatoglyph etched deep into the rock "Carn March Arthur", or the "Stone of Arthur's Horse", which was supposedly made by King Arthur's mount, Liamrai, when it was hauling the Afanc from the lake. Lolo Morganwg put forth a tale in which the creature's thrashings caused massive flooding which ultimately drowned all inhabitants of Britain except for two people, Dwyfan and Dwyfach, from whom the later inhabitants of Prydain descended.

The lake given where it lived ranges from Llyn Llion, Llyn Barfog, near Brynberian Bridge, or in Llyn Y Afanc near Betws-Y-Coed. Llyn yr Afanc was named after the creature. 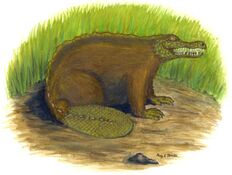 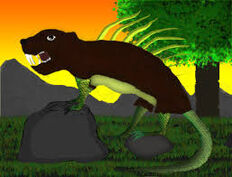