It's Something Wiki
Register
Don't have an account?
Sign In
Advertisement
in: It's Something, Cryptozoology, Cryptids,
and 14 more

Ahuizhotl or Ahuizoti is a legendary creature in Aztec culture. Meaning 'water oppossum', also called Sun Dog, the Ahuizoti is a vicious, savage predator. It resembles a medium-sized dog with a monkey's paws and a human hand at the end of its tail. The creature has also been described as otter-like with five hands, one on it's tail and capable of manipulation.

The Ahuizoti was a feared creature supposed to live in or near water. It drags people and fishermen under the water using the hand on his tail. It would eat only their eyes, teeth, and nails.

The creature is mentioned in Book 11 of the Florentine Codex, a description of plants and animals in Mexico.

...very like the teui, the small teui dog; small and smooth, shiny. It has small, pointed ears, just like a small dog. It is black, like rubber; smooth, slippery, very smooth, longtailed. And its tail is provided with a hand at the end; just like a human hand is the point of its tail. And its hands are like a raccoon's hands or like a monkey's hands. It lives, it is a dweller in watery caverns, in watery depths. And if anyone arrives there at its entrance, or there in the water where it is, it then grabs him there. It is said that it sinks him, it plunges him into the water; it carries him to its home, it introduces him to the depths; so its tail goes holding him, so it goes seizing him ... [When the body is retrieved] the one it has drowned no longer has his eyes, his teeth, and his nails; it has taken them all from him. But his body is completely unblemished, his skin uninjured. Only his body comes out all slippery-wet; as if one had pounded it with a stone; as if it had inflicted small bruises ... When it was annoyed - had caught no one, had drowned none of us commoners - then was heard as if a small child wept. And he who heard it thought perhaps a child wept, perhaps a baby, perhaps an abandoned one. Moved by this, he went there to look for it. So there he fell into the hands of the auítzotl [sic], there it drowned him...

Not much else is to be said about the Ahuízotl, as the creature has apparently become extinct - in Mexico, anyway. A similar creature was described by Christopher Columbus in a letter sent from Jamaica to the King and Queen of Spain on July 7, 1503: A cross-bowman slew a beast that resembled a large cat, but was much bigger and had a face like a man. He transfixed it with an arrow from the breast to the tail. Nevertheless it was so fierce that he had to cut off an arm and a leg. When a wild boar, which had been given to me as a present, caught sight of this beast its bristles stood on end and it fled with all speed ... [the animal] immediately attacked the wild boar, encircled its mouth with its tail and squeezed vigorously. With the one arm it had left, it throttled the wild boar's throat as one strangles a foe (27).

Similar creatures are mentioned in many other Mesoamerican cultures such as: the Hopi Indians of Arizona and New Mexico, Shasta Indians of northern California and the Sumu Indians of Nicaragua. 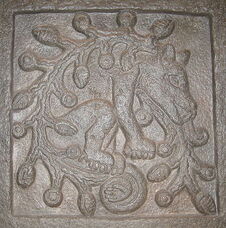