In the early morning hours of August 16, 1968, a Spanish farmer was thunderstruck to discover no less than two, scurrying, cephalopod-like creatures, which were clearly not of this Earth.

This evidently extraterrestrial encounter occurred just on August 16, 1968, when a farmer identified as John Mateu awoke at about 6:00 a.m. to begin his chores for the day.

As the farmer stepped outside to survey his property — which was nestled approximately 4-miles away from Tivissa, in the province of Tarragona — who had no way of knowing that this ordinary Friday morning was about to transform into a Lovecraftian nightmare.

Mateu was preparing to feed his cattle when his eye was caught by a strange luminous object, which he believed to be a “reflection from a car,” just over a half-mile away. The farmer — with a good Samaritan streak not seen enough these days — shouted to his wife that he thought a car had broken down and he was going to see if he could be of assistance.

With his faithful dog in tow, Mateu made his way toward the illuminated object, growing more perplexed with every step. Finally, Mateu realized that what he was looking at was not a motor vehicle at all, but a self-illuminated ovoid structure that resembled, in his own words, a “half watermelon.”

To make matters even more bizarre, this hemispherical object was hovering nearly 4-feet off the ground. It was at that moment that things went from weird to positively hallucinogenic for the poor farmer.

While puzzling over the radiant, dome-shaped UFO suspended over his property, Mateu noticed something else moving swiftly on the far side of the floating object. The farmer later described two “things,” which he claimed were “running” toward the UFO.

Mateu testified that this pair of — what one can only surmise were — extraterrestrials, were just over 3-feet in height and approximately 330-feet from the object. This gave Mateu an excellent look at these bizarre, yet swift, octopoid creatures, which were, like everything else around them, illuminated by the UFO.

Not unlike other Terra-Octopoda that have been seen across the world — such as Spain’s Octosquatch and USA’s indescribable Octoman — Mateu would describe these almost unimaginable entities as resembling lightly colored octopi with either “four or five legs.”

The startled farmer concluded that these bizarre beasts were extremely “disgusting,”which is a sentiment that these (ostensibly frightened) beings might well have shared in reverse. It’s worth noting that Mateu was not sure if the blur of sprinting, tentacle-like appendages represented “four or five legs.”

While quadrupeds are common on Earth, animals lacking bilateral symmetry are decidedly not. So if these speedy varmints really did have five legs, then it’s almost a certainty that they were aliens.

Within moments, the two cephalopodan creatures had piled back into their possibly interstellar (or perhaps inter-dimensional) vehicle and shot off into the sky leaving the mystified Mateu and his dog alone in the field. It was at this point that the farmer, understandably overwhelmed by the spectacle, fainted.

According to the farmer’s brother, Sebastian — an accountant from the nearby Village of Darmós — Mateu remained missing for nearly a day. One must suppose that Mateu’s wife had assumed that after he had helped with the stalled car, her husband had returned to his regular duties, which would explain why her curiosity was not aroused by his absence. Either way, Mateu seemed unharmed.

That having been said, there is a possibility that at least a portion of Mateu’s missing time may have been spent aboard the extraterrestrial craft. Perhaps he had more contact with these tentacled terrors that he remembered. This, of course, is pure speculation.

In the days that followed this event, Mateu and his brother noticed a large circular area of burnt pasture below where the UFO had been hovering. The farmer also discovered two, apparently older, patches of charred grass that were approximately the same size as the first.

While scientific tests were apparently not performed at the “landing” sites, there is circumstantial evidence of higher than normal electromagnetic fields near the landing areas. On three separate occasions Mateu and his brother noticed that their watches had stopped while they were wandering around in close proximity to the semi-circular scorch marks.

This phenomenon was also observed by an Austrian couple who had set up camp in the area. The man, identified as Hans Volkert, allegedly snapped (and published) photos of the singe marks, but, unfortunately, there seems to be no trace of them. It’s likely that the images are yellowing in some family album waiting, perhaps, to be revealed by some inquisitive relative at some point in the future.

On August 27, 1968, the Barcelona Tele-Express published the first account of this captivating case in the form of a “letter to the editor,” which was scribed by Sebastian Mateu. In this letter, Sebastian detailed his brother’s encounter with the UFO and the Alien Octopoids. This information was also enclosed in the esteemed “Flying Saucer Review, Special Issue no. 4.”

Following the newspaper account, the region of Tivissa was besieged by ufologists, flying saucer buffs and journalists hungry for a story. The letter that Sebastian had sent did not include a return address, making it challenging for the reporters and curiosity seekers to track Mateu down. This is when the Barcelona based CIS (Center for Interplanetary Studies) got involved with the investigation.

The CSI requested the original letter from the Tele-Express and followed the clues in the note, which stated that the encounter occurred near Tivissa and that Sebastian Mateu hailed from the Village of Darmós, Tivisa, Tarragona. When this information proved insufficient, the Tele-Express published a notice on September 13, 1968, requesting that Sebastian contact the CSI.

Nearly two weeks later, on September 25, Sebastian — now, apparently, overwhelmed by the publicity his brother’s run-in with the Octopoids was garnering, as well as fearing for his job and reputation — responded to the notice with prudence and refused to offer any additional information about himself, his brother or the close encounter. He exchanged some more letters with the CSI, but no more pertinent details were revealed.

At this point noted paranormal investigator and author of 1979’s “Dictionary of Parapsychology,” Julio Roca Muntañola, entered the fray. He believed that the Tivissa region was a nexus of mystical forces that attracted not only extraterrestrial, but possibly even spiritual beings. He even went so far as to state that he had discovered a “magic cave,” wherein her was able to travel to other“universes.”

Muntañola would later claim the area were the UFO had hovered was so magnetized that it contributed to the crash of a Piper Cub airplane that has inadvertently flown over the area. The wreckage was allegedly found near the town of Ginestá. While there is no indication of how long these magnetic effects persisted, one can only imagine that local pilots must have been very wary when soaring over the sparse terrain of Tivissa.

At this point a journalist named Alex Boots claimed to have not only found, but to have interviewed the enigmatic Mateu at a local tavern. Even after this report the situation in Tivissa had become so off the wall that some investigators simply decided to wash their hands of the entire affair and label it a hoax, despite the evidence and the appearance of similar creatures… of which there were at least two.

It would seem as if 1960s Spain was a hotbed for anomalous, octopus-like, land cryptids. Aside from the aforementioned Octo-Squatch — which came on the scene in 1961, in the northern Spanish province of Vizcaya — there is the “lost” case of an unnamed woman from Barcelona who reported stumbling upon a “cactus-like” creature with “four limbs” on December 3, 1967. This incident was evidently reported by Antonio Ribera Ribera.

The anonymous eyewitness claimed that the creatures appendages left deep grooves in the ground as it moved, but when later questioned she refused to elaborate on her testimony.

Noted historian and naturalist, Terry Hooper-Scharf, illustrated the intriguing cactus critter and speculated about its possible relationship with the Alien Octopids, stating:

Indeed it would. But either way it seems remarkable to consider just how many bulbous headed, tentacle bearing and occasionally hairy monsters there were roaming around the Spanish countryside during the 1960s. 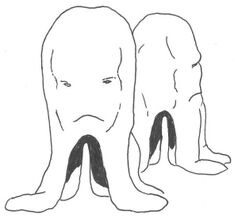 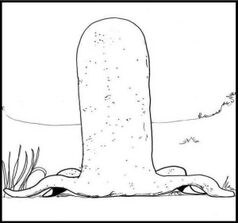 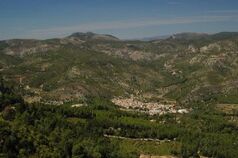