It's Something Wiki
Register
Don't have an account?
Sign In
Advertisement
in: It's Something, Cryptozoology, Cryptids,
and 8 more

The Bakunawa, also known as Bakonawa, Baconaua, or Bakonaua, is a deity in Philippine mythology that is often represented as a gigantic sea serpent. He is believed to be the god of the underworld and is often considered to be the cause of eclipses. It appears as a giant sea serpent with a mouth the size of a lake, a red tongue, whiskers, gills, small wires at its sides, and two sets of wings, one is large and ash-gray while the other is small and is found further down its body. Mythology Tales about the Bakunawa say that it is the cause of eclipses. During ancient times, Filipinos believe that there are seven moons created by Bathala to light up the sky. The Bakunawa, amazed by their beauty, would rise from the ocean and swallow the moons whole, angering Bathala and causing them to be mortal enemies. To keep the Bakunawa moons from completely being swallowed, ancient Filipinos would go out of their homes with pans and pots, and would make noise in order to scare the Bakunawa into spitting out the moon back into the sky. Similar creaturesOther serpentine/dragon deities are also found in other myths in the Philippines. These include the Bawa, the Bauta, Mameleu or Mamelen or Nanreben, and Marcupo or Macupo of Hiligaynon mythology, Buwaya or Nono of Tagalog mythology), and Mikonawa or Mikunawa or Minukawa of Bagobo mythology. 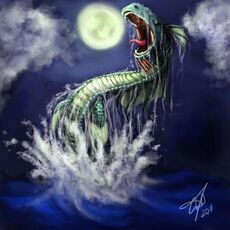 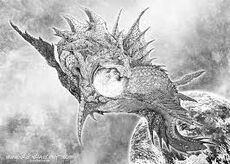 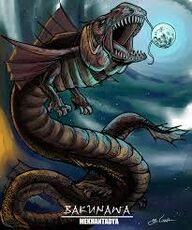