It's Something Wiki
Register
Don't have an account?
Sign In
Advertisement
in: It's Something, Cryptozoology, Cryptids,
and 6 more

The legendary Cockatrice, an ornament in the drama and poetry of the Elizabetthans, was invented in the late 12th century as a duplicate of the Basilisk or Regulus, as described in Pliny’s Natural History. As with the Basilisk the Cockatrice appearance resembles a giant rooster with a lizard-like tail. It was supposed to be born from an egg laid by a cock and incubated by a toad or serpent.

Its reputed magical abilities are also very similar to the Basilisk and include turning people to stone or killing them by either looking at them, touching them, or sometimes breathing on them. The Jewish Encyclopedia (1906) considers the Cockatrice and Basilisk to identical, although some reasearchers would state that even though both are a cross between a roster and a snake, the Basilisk is more reptilian in appearance where as the Cockatrice takes on more rooster like apperences.

It is said in the medieval bestiaries that the weasel is the only animal that is immune to the glance of a Cockatrice. It was also thought that a Cockatrice would die instantly upon hearing a rooster crow and according to legend, having a Cockatrice look itself in a mirror is one of the few sure fire ways to kill it, like the head of Medusa, the Cockatrice's powers of petrification were thought still effective after death.

In the King James Version of the Old Testament the Cockatrice is used several times,to translate Hebrew tziph'oni I saiah 11:8 And the sucking child shall play on the hole of the asp, and the weaned child shall put his hand on the cockatrice' den.

Isaiah 14:29 Rejoice not thou, whole Palestina, because the rod of him that smote thee is broken: for out of the serpent's root shall come forth a cockatrice, and his fruit shall be a fiery flying serpent.

Isaiah 59:5 They hatch cockatrice' eggs, and weave the spider's web: he that eateth of their eggs dieth, and that which is crushed breaketh out into a viper.

Jeremiah 8:17 For, behold, I will send serpents, cockatrices, among you, which will not be charmed, and they shall bite you, saith the LORD.

In all these instances, the Revised Version renders the uses the term Basilisk in place of Cockatrice. Refer back to Basilisk for more information pertaining to the Cockatrise and to compare the many similarities between the two.

Historical records indicate that the creature was quite small, no more than 12 finger lengths, like the Basilisk, however some accounts state that the Cockatrice grew to be much larger. 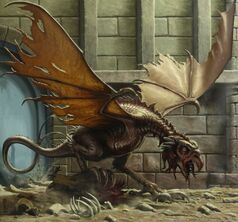