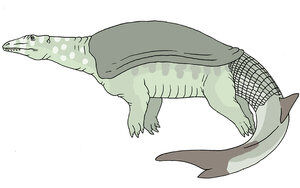 Moha Moha is an engaging-looking chimera. Reportedly, this inhabitant of Queensland's Great Barrier Reef resembles a giant long-necked turtle with the tail of a fish. Miss S. Lovell, a school marm from Sandy Cape on Great Sandy Island reported the following, in 1890:

We have had a visit from a monster turtle fish. I send a sketch of it. It let me stand for half an hour within five feet of it. When tired of my looking at it, it put its large neck and head into the water and swept round seaward, raising its dome-shaped body about five feet out of the water, and put its twelve feet of fish-like tail over the dry shore, elevating it at an angle. Then, giving its tail a half-twist, it shot off like a flash of lightning, and I saw its tail in the air about a quarter of a mile off where the steamers anchor...The jaws are about 18 inches in length; the head and neck greenish-white, with large white spots on the neck, and a band of white round a very black eye... The body was dome-shaped, about 8 feet across and 5 feet high, smooth, and slate-grey in colour. Tail about 2 feet, the fish part wedge-shaped, and fin of chocolate-brown. Then beautiful silver shading to scales size of thumb nail.

Her correspondence, forwarded to Land and Water, went on to indicate the scales were perpendicular to the axis of its body, and related a tale of how it had reportedly attacked an Aborigine camp eight years earlier.The editors of Land and Water suggested it might have been a Fly River Turtle, which has a long neck. They made no attempt to account for size; the Fly River Turtle does not exceed 3 feet in length. Various suggestions have been made for the tail: that a shark or other fish was biting the large turtle's behind, for example. Lovell's letters steadfastly maintained that it was a monster, "half fish, half tortoise.'

Many books in the decades following the only recorded sightings of the Moha Moha have devoted space to this creature. Bernard Heuvelmans's In the Wake of Sea-Serpents, the classic text on marine Cryptozoology, examines all of the correspondence, and identifies contradictions in Miss Lovell's accounts. Heuvelmans also notes that scales perpendicular to the axis of an animal's body are a physical impossibility, if it is to use its tail to any advantage.

Some later writers who have bothered with the tale wonder if Miss Lovell even existed, or if the letters were the product of some anonymous hoaxer. Still, she apparently was consulted by William Saville Kent, assistant curator of the London Natural History Museum, when he wrote The Great Barrier Reef of Australia. He christened the species Chelosauria lovelli 1890. A little over 100 years later, neither devotees nor souvenirs mark the Moha Moha's brief, dubious existence.

Today, even the cryptozoologists avoid mentioning its name.